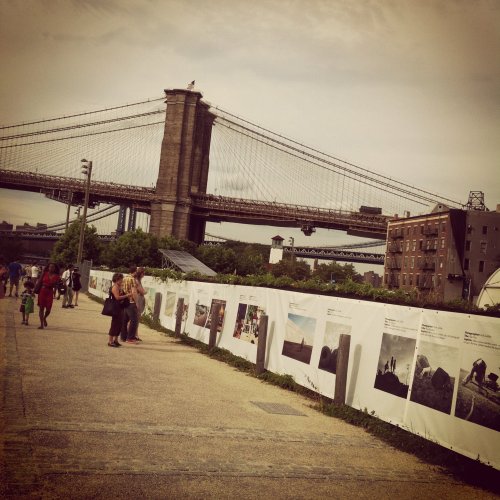 WHEN WRITING ABOUT OLD PROCESSES such as some of those on display at Photoville a few weeks ago, it’s easy to slip into a nostalgic space that pines for obsolete things and damns the technology that (usually) antiquates them. That’s why the inaugural Photoville festival, a celebration of all things photographic, intrigued me.  I wanted to see technology and art and narrative forms playing together in the same happy space; Lomography and tintype celebrated as much as slick multimedia storytelling, emerging photographers sharing the stage with doyens. I imagined a loosely curated gathering ala Brooklyn Flea—complete with food trucks.

But as every reporter knows, once you start digging around, other stories are revealed. So, in talking to photo folks about all this, I came to a notion that Dumbo—the new technology, as it were–might usurp the old Flatiron photo district. Having spent quite a lot of time around photographers and in darkrooms, transitioning from analog to digital, chemical darkroom to digital, I had more than just a reporter’s interest in it. The developing story [no pun] became a prurient check in, akin to spying on the new neighbors in your childhood home.

New York City’s place memories are familiar: designers scuttling garment racks around the Fashion District or cellists veering their wheeled instruments around Lincoln Center. My own such memory of the Flatiron is photographers emerging from loft studios with yellow manila job envelopes or Ilford boxes tucked under their arms. Or, peering through photo lab windows, seeing them inspecting contact sheets through loups, their faces wreathed in fluorescent white light at the communal light tables.

Now, much of that business of photography is done by digital transmission, in sleek offices, not labs with the stinging smell of developer. Much has expanded into other disciplines so that photographers are also designers and publishers, or they’re multimedia producers. Photo booksellers are gallerists and gallerists become event producers, making the very formerly segmented field of photography into a very large conversation.

Anyway, all of this is to say, this story turned out to be about old and new, about how what works for some doesn’t work for others, and about how the photo district will always cycle through the city and depend not on bricks and mortar or a place of manufacture, but of imagination and opportunity. And cheap rent. Right now that’s happening more in Dumbo than on 23rd street, in large part through arts-marketing and the vision of a well-funded developer who could help subsidize a cross-river migration of the photo community. But, as some moving to Dumbo find, it’s one thing to build it and another to have people come.

Events such as Photoville and the New York Photo Festival, a Dumbo-based photo fair, combine a pleasing look at the past and optimistic peek into the future, but also underscore a need to remind the public that imaging-making is a serious business. You can read my Wall Street Journal story here or [PDF].